2009, ed. Germans, Poland and Colonial Expansion to the East: 1850 Through the Present 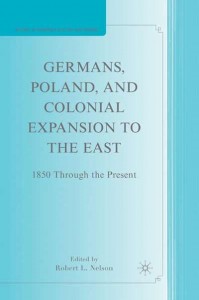 This incisive collection probes the history of colonialism within Europe and posits that Eastern Europe was in fact Germany's true "colonial" empire. Through a series of interdisciplinary essays ranging from 1850 to the European Union of today, this collection explores the idea that Germany's relationship with Poland and Eastern Europe had many similarities to the practice of "overseas" colonialism. As the contributing scholars aptly demonstrate, the history of Germany's relationship with Poland contains all the trappings of the classic colonial encounter, from its structures of power and control, racism and cultural chauvinism, to the implementation of wholesale scientific experimentation in a "lawless" environment.

“The first volume devoted exclusively to German ‘inner colonialism’ from the Polish frontier in the 1850s until the present day, these interdisciplinary essays are a signal contribution to scholarship on German continental empires, including the ‘Third Reich.’”--A. Dirk Moses, University of Sydney

“For a while now, German historians have been remarking upon the congruencies and complicated reciprocities between Germany’s imperialist designs on Eastern Europe during the two world wars and the earlier history of overseas colonialism before 1914. Delivering historical depth, focus, and conceptual coherence, this fine collection of essays now gives chapter and verse for that claim. Nelson and his contributors match a challenging general argument about the nature of colonialism to a series of admirably persuasive case studies.”--Geoff Eley, Karl Pohrt Distinguished University Professor of Contemporary History and Chair, Department of History, University of Michigan