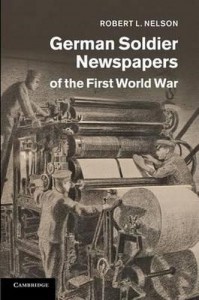 This book is the first systematic study of German soldier newspapers as a representation of daily life on the front during the First World War. It reveals the importance of comradeship and manliness in soldier identity, both for soldiers' morale as well as for justifying the treatment of occupied civilians.

The literature on trench journalism is well-established for Britain and France during the First World War, but this book is the first systematic study in English of German soldier newspapers as a representation of daily life and beliefs on the front. Printed by and for soldiers at or near the front line these newspapers were read by millions of 'ordinary soldiers'. They reveal an elaborately defined understanding of comradeship and duty. The war of aggression, the prolonged occupation on both fronts and the hostility of the local populations were justified through a powerful image of manly comradeship. The belief among many Germans was that they were good gentlemen, fighting a just war and bringing civilization to backward populations. This comparative study includes French, British, Australian and Canadian newspapers and sheds new light on the views of combatants on both sides of the line.

'An important contribution to knowledge of the German military perspectives on war.' Times Literary Supplement

‘In this engaging study, Robert L. Nelson asks a question that has long intrigued scholars of World War I: why did German soldiers continue to fight until 1918? He looks for the answer in German soldiers' newspapers, a curious form of wartime journalism produced for, and often by, the men in the trenches. In papers that ranged from crude pamphlets to polished regimental journals, he finds a discursive world of rich complexity, shot through with assumptions about gender, family, and Germany's “civilizing mission.” In the language and iconography of these sources, Nelson locates the underpinnings of unity and cohesion among everyday German soldiers. He argues that in the absence of coherent national traditions, the newspapers emphasized an ideal of “manly comradeship” to justify the soldiers' role as aggressive occupiers in a foreign land.’ Andrew D. Evans, American Historical Review